Booze Braggart Abuzz in the Press 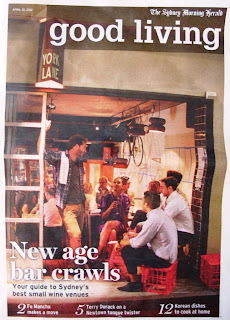 Last week was a bumper week for BB in the press. For those of you who live under a rock Rachel Olding - bar writer extraordinaire for SMH - filed a couple of cracking stories of the growth of the bar scene in Sydney. She contacted yours truly for a comment. Below is what I had to say in Good Living's 'Take a walk of the small bar trail' piece. Olding asked me on my take on the new wave of bars taking Sydney by storm:

”Initially, people were perhaps being a little bit conservative and were trying to open venues in proven areas like Surry Hills and Darlinghurst, but people are becoming so confident that venues will attract the crowds that they’re spreading right out,” McGoram says.

”People are even looking to be the first venue in an up-and-coming area and to market that fact.”

”Look at Freda’s in Chippendale. No one ever thought there’d be a bar there and now everyone’s touting it as the next big suburb… I really like the CBD bars because it’s a real case in point to see how much Sydney has changed,” says Simon McGoram, who leads bar tours around Sydney, including a CBD trail that takes in Grasshopper, Grandma’s and Stitch. 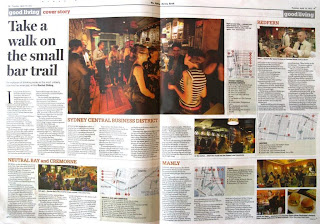 You can read the full article here.

But it doesn't end there - the previous day saw me get another shout out here.

In all it was a good week for BB, but a great week for Sydney's new wave of bars. There's a real positive vibe about what Sydney is creating in terms of bars at the moment and it's great to see that whole-heartedly supported by main-stream media. Thanks Rachel for your fine work!
Posted by Simon McGoram - The Booze Braggart at 11:07 AM No comments:

I was lucky enough last week to get an invitation down to theloft by the inimitable Jason Williams - and I must admit that I was overdue a visit. My last appearance was during last year's Bartender of the Year Competition and before that the Time Out Shake Down. But it wasn't always special events that brought me down to the wharf.

Opened in 2003 theloft is one of Sydney's more successful cocktail bars - the first time I ever visited the joint I was sipping Mojitos with Dale De Groff and the Bartender magazine crew on a scorching hot September day back in 2006. Nestled on sunny King Street wharf theloft at the time was the epitome of everything good about Sydney and it certainly played a part it moving me over here from Auckland. As the city's bars evolved over the the next five years, however, theloft looked sure to be left behind - fortunately the good folk at Keystone Group had the foresight to hire Jason Williams the Bartender magazine Bartender of the Year 2010.

Jason has been making huge inroads into the drinks programs at all of the Keystone venues (like Cargo, Kit & Kaboodle, The Winery etc) and his latest work - the new cocktail list at theloft - seems sure to restore some of the venues serious cocktail cred. With its sleek art deco design the menu advertises signature creations, old school libations and contemporary classics. It even includes a drink from my old haunt in Auckland - Mea Culpa - the Honey & Clove Margarita  which I created in 2006. The very year I first stepped foot in theloft I might add.

The Honey & Clove Margarita includes Tequila,lime and Cointreau with a cinnamon, honey & clove syrup and a ginger salt rim. Originally I was making this drink with a house made honey & clove tequila - Sauza Hornitos infused with clove and sweetened with an organic Beechwood honey from the South Island of NZ. The infused Tequila was tasty enough to even be our punters' shot of choice. At any rate the beverage in its current format is mighty tasty booze - thanks to Thiago Santos for introducing this one to Sydney.

I might add that the drink above is one of the more simple beverages on the menu. The next tipple I went for was the Beat Generation - having been a 20th Century Lit student I just couldn't resist.

The drink itself combines Ilegal Blanco Mezcal with pineapple, agave, ale, lemon and bitters. It's served with a tasting glass of Fat Yak Pale Ale on the side and some crisps then garnished with a peach and leather dry ice 'flavour fog'. It's perhaps the fanciest boilermaker you'll ever come across and the drink is beautifully balanced - though I'd have enjoyed a little more smoke through coming from the Mezcal. But then again I'm the sort of guy who would by smoky peat chewing gum if someone would only market it.

The list combines creativity and a few adavanced techniques with just some damn fine choices of classic cocktails. One of my favourites has to be the Pan American Clipper - Charlie Ainsbury perhaps makes the best I've ever had, but I'll be back to theloft to see how there mix of Calvados, pommegrante, lime and absinthe holds up.

I suggest you all get down to theloft early to mid week to stay far from the madding crowd and check this list out. It's expertly constructed and evidence yet again that it's not just 'small bars' that are doing great things in this town.
Posted by Simon McGoram - The Booze Braggart at 12:14 PM 1 comment:

It's 11am and 27 degrees outside. The perfect time then to drink some warm gin. The tipple I've poured myself today is Lighthouse Gin - another fantastic award winning spirit that harks from New Zealand shores.

Produced in Greytown - about 75 kilometers out of Wellington - Lighthouse is a classic distilled dry gin batch produced in a 200L copper pot still made in Masterton.  The spirit is produced by Greytown Fine Distillates - the brainchild of Neil Catherall, the company’s distiller and master craftsman, and Andrew Wright, a local businessman and distiller James Graham.

Lighthouse Gin, named after the late 19th century cast-iron Cape Palliser Lighthouse on the southernmost tip of the North Island, combines nine different botanicals including zesty New Zealand navel oranges, Yen Ben lemons (an Australasian cultivar not dissimilar to the Lisbon lemon) and local kawa kawa leaves (they have bitter peppery/minty flavour that I enjoy when bush walking back in NZ).

Juniper,  slightly soapy corriander seed and pithy orange citrus dominate the nose, but there is an underlying spiciness of warm ginger, black pepper and floral oris root too. On the palate this gin proves to be incredibly well poised with it's resinous and spicy qualities giving way to a lingering, tingling, zesty tang. The spirit has a generous viscosity with a smooth release of alcoholic heat that belies it's 42% abv strength.

It's excellent in a G&T with lemon, not lime. And after testing proves to stand up well in classic gin cocktails like Aviations and Negronis.

In short, I reckon the folks from Lighthouse have done a bang tidy job on this one. Go to NZ and buy yourself a bottle or easier still check them out online.
Posted by Simon McGoram - The Booze Braggart at 12:02 PM No comments:

Boozers that I've boasted, bragged and blustered to: